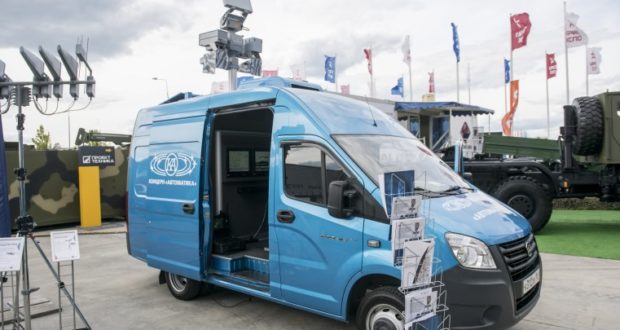 Rostec’s Roselectronics holding company has developed a new automated suite to counter drones that are available for purchase without a licence. This unmanned suite is able to identify and prevent drones from trespassing on a safeguarded territory. The new product does not affect ambient communication or navigation equipment and can be used at airports, within cities or on high-tech facilities. The company has started testing the relevant samples.

The system (called Ataka DBS) does automated radio frequency detection and blocks the drone’s satellite navigation and communication channels. Losing contact with its controlling unit, the drone has to eventually return to its launching point or make an emergency landing, depending on the programmed algorithm. The system’s reaction time is 0.1 s.

Ataka DBS detects and suppresses control channels in the frequency range used by civilian drones, i.e. between 2 and 6 GHz. These drones can be used for unauthorised video surveillance, transportation or for releasing compact cargo. The suite reports the incident to relevant parties by a text or e-mail message.

“The development of unmanned aerial vehicles has resulted in drones being actively used for civil purposes, in addition to military – as an example, for industrial espionage or surveillance. Even an unprofessional or homemade drone can be dangerous. Using the modularity principle, the system we have developed establishes a no-fly zone for unauthorised drones over a specific territory. Given that the operation of authorised drones is not affected, our system has aroused interest from energy sector companies who are actively using drones for monitoring purposes,” said Oleg Yevtushenko, Rostec’s Executive Director.

Modules for drone radio frequency detection and suppression constitute the core of this suite, developed by Research and Production Company Almaz, of Roselectronics holding company. Each device has a detection radius of 1.5 km and a suppression range of 1 km. The system can be used as a standalone suppression cell or as a suite of interconnected cells covering a specific perimeter. The number of modules and their location are subject to the specific parameters of a safeguarded facility.

2019-03-20
Akramov
Previous: Rostec to take part in CIEX for the first time
Next: Rostec develops an anti-civilian drone system with friend-or-foe recognition