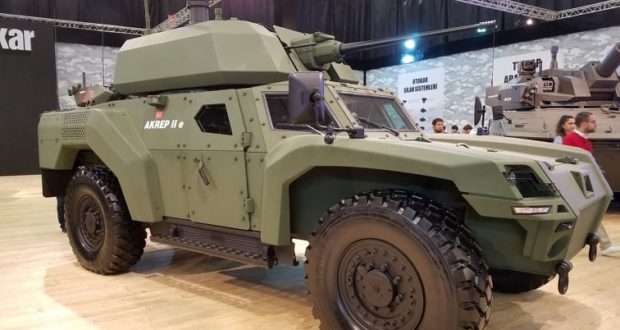 The Turkish company Otokar, a subsidiary of the Koç group, presented its range of armored vehicles and concepts at the Idef 2019 show in Istanbul with several new features such as the special forces versions of its Ural 4×4 armored platform, its Akrep 2 concept and its medium tank Tulpar.

Ten vehicles were presented, but two of them attracted our attention, the Ural SOV, which is a LRPV (long range patrol vehicle) and the Akrep 2, which falls into a very restricted category of high firepower reconnaissance vehicles.

The Ural SOV (Special Operations Vehicle), is the LRPV version of the Ural platform which is a fully versatile tactical 4×4 armored car. It is intended for special forces and can carry from 5 to 9 operators. It has 3 shooting positions in the version without a roof. At the front at the back and above, the car can take Western or Russian weapons. The Ural SOV is armored on the doors and underneath against explosions, but it can be modified in less than four hours by adding a roof and full armored doors with rudimentary tools.

Entering the Remdizel Typhoon VDV category, the Akrep 2 is much more innovative than its Russian counterpart.
Based on a 4×4 chassis with heavy armor, the reconnaissance vehicle is distinguished by two major features, a heavy turret for a rather small vehicle. The gun goes from 25 to 90mm, which gives the Arkrep 2 considerable firepower for such a small volume and agility. Note that it is air transportable and can be dropped with a parachute.
The second characteristic is the innovative engine. Indeed, Otokar chose to equip the Akrep 2 with an electric motor while keeping the option to put a hybrid engine of great endurance or a totally electric motor, like the one presented at the show.
The advantage of this engine on this type of vehicle is the ability to move anywhere in total silence which is ideal for patrols in hazardous areas or for recce. In addition, in electric mode, the vehicle is completely cold and has a very small thermal footprint, which makes it not almost invisible to drones or thermal imaging cameras at night.
The Akrep 2, like its ancestor Akrep that was produced in 1995, is an armored vehicle that can carry three people in a heavily armored environment.