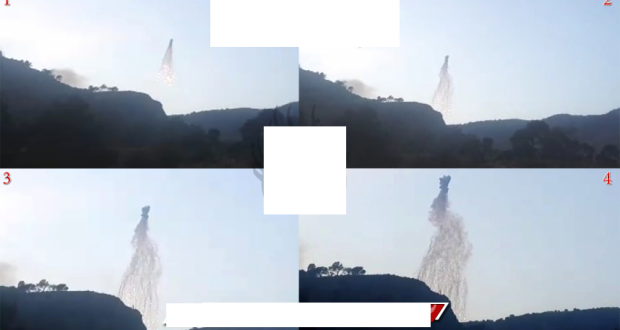 Was white phosphorus used by the tunisian army against Kassrine terroristes ? The source is somehow biased and we don’t want to advocate terrorism, but it seems that the effective tracking of the terrorist brigade Okba Ibn Nafi (AQIM) by the Tunisian Army has pushed them to entrench in the Kassrine region in western Tunisia.

In a desperate publication, AQIM terrorists made an unprecedented revelation; the Tunisian Army had used white phosphorus shells in their bombing of Salloum Mountain area. They even published some photographs to prove their claims.

It seems that the ammunition used was artillery shells, not air-dropped bombs. The photos allegedly show an area being bombed in the Kassrine region, exhibiting the same umbrella that characterizes this type of ammunition.

Until now, no one knew about the usage of white phosphorus in Tunisia and no one expected the Tunisian Army to resort to such a weapon. The neighboring Algeria has not used in its fight against terrorism, favoring other types of incendiary bombs. Moreover, contrary to popular belief the use of white phosphorus is prohibited only against civilians. In North Africa, the only use this weapon against civilian populations took place between 1975 and 1976 in the wake of the “Green March” of King Hassan II on Western Sahara. The use of white phosphorus, the intervention of US reconnaissance aircrafts and the various arms shipments to Tunisia indicate a desire to isolate the terrorist threat in the border areas and to eradicate it completely.

(P.S: we removed the markings belonging of the terrorist group on the photos to avoid further spreading of their propaganda) Previous: France to sell the two Russian Mistral Ships to Egypt
Next: Terrorism in the Horn of Arica: What about Tanzania?