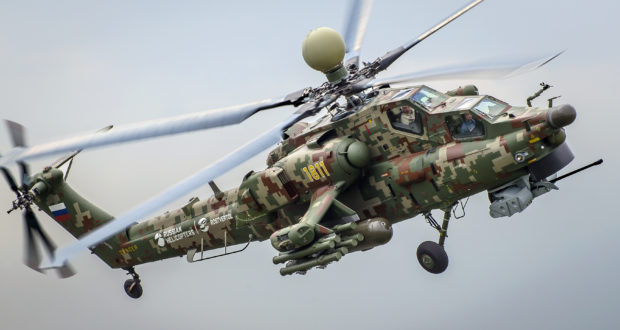 First international demonstration for the MI-28NE in Dubaï

Mi-28NE attack helicopter manufactured by “Russian Helicopters” Holding Company (Rostec State Corporation) made its first demonstration flight as a part of the flight program at Dubai Airshow 2021 international exhibition. Guests and participants had the opportunity to enjoy complex aerobatics of the combat helicopter with the unique maneuverability.

Famous Russian Mi-28 attack helicopter in its export modification made its debut at Dubai Airshow 2021. This was its first demonstration outside of Russia. Mi-28 helicopter family is called “Night Hunters” (or “Havoc” according to NATO classification). Mi-28 has been taken in the inventory of the Russian Armed Forces as the main attack helicopter of the Aerospace Forces. “Night Hunter” showed its outstanding flight performance in Dubai sky. Mi-28 can perform a number of aerobatics available only to aircraft.

Many aerobatics were performed at minimum altitudes and speeds, which is especially important for survivability of the helicopter in real combat conditions. Mi-28NE demonstrated combat turns, nose diving, pitch-up maneuvers, rearward flight, hovering and climb with rotation under the supervision of Sergey Barkov, honored test pilot and hero of Russia.