Above is a picture of the Mauritanian Terrorist Saleck Ould Cheikh who was captured on the border between Guinea and Guinea-Bissau. Courtesy The North African Post

Over the last two months AQIM (Al-Qaeda in the Maghreb) or the Al-Moulatan Brigade has launched two high profile and successful attacks in Bamako and in Ouagadougou. These attacks targeted Western (UN and French) Interests and hotels in both cities. In both instances Western Forces[1][2]assisted in the recapture of the hotels.

History bears that out for AQIM. It was formed in 1998 after the turbulent period of time in Algeria[3]. It was known as the Salafist Group for Preaching and Combat (GPSC) and changed its name in January 2007 after formally joining Al-Qaeda in 2006. Previously the group has used Northern Mali and Southern Algeria as a base of Operations however it is suspected of moving into both Tunisia and Libya.

So the question now becomes what will become the next target or base of operations? There are plenty of opportunities in West Africa but recently one event occurred that has French Speaking Media Outlets talking openly about the region. It appears that a Mauritanian National who was a member of Al-Qaeda and had escaped Death Row after admitting his role in a Car Bomb Assassination Plot against the President and who had escaped was captured along the Border between Guinea and Guinea-Bissau[4]. The question about whether or not AQIM was attempting to form a cell has probably been answered in the affirmative however the question of where it is located be it in either Guinea or Guinea-Bissau has yet to be determined. 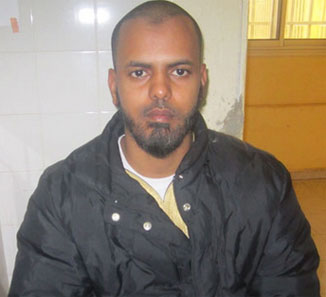 Above is a picture of the Mauritanian Terrorist Saleck Ould Cheikh who was captured on the border between Guinea and Guinea-Bissau. Courtesy The North African Post

Already several steps have been taken by Nations in the region. In Dakar and in N’Djamena hotels in these cities are increasing security[5]. Both Senegal and Chad are close allies of both Paris and Washington in the effort to defeat Islamist Groups. Chad itself has been targeted by the Nigerian Islamist Group Boko Haram on more than one occasion[6]during the last year.

So it’s not that much of a stretch of the imagination to conclude that Dakar could be the next target of the Islamists. There is another interesting wrinkle that could be exploited by the Islamists. Neighboring Gambia has declared itself an Islamic State recently.[7] Due to the close proximity it is also a host for some of the Gambian Opposition Parties as well. After the 2014 coup attempt in Banjul the US and Dakar are now sharing Intelligence regarding what is occurring in the region[8].

Al-qaeda had a presence in the region during the Sierra Leone Conflict during the 1990s[9]. The Group was involved in the Blood Diamond Trade in order to raise funds to launch Operations against American and other interests.

Both Guinea and Bissau have had a history of Coups and poor Governance. They sit on historical trade routes as well so this means that there is an opportunity to find an interest to exploit and raise funds that way. Two things that could generate some interest are the trade in both Narcotics and Human Beings. Also the Extractive Mining Industry in Guinea could be a quick and easy source of revenue.

[4] http://northafricapost.com/10588-mauritania-terrorist-on-the-loose-arrested-in-guinea.html for a english translation of this story.

Previous: An Attempt to Influence US CT Strategy in Africa?
Next: Could ISIS be forming a New Cell in Central Africa?