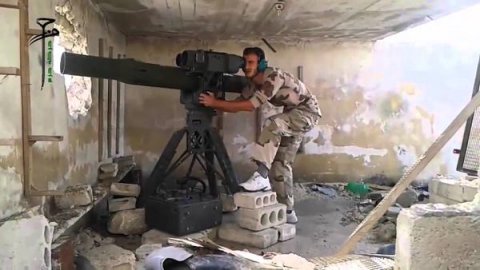 What relation between the purchase of six hundred Tow anti tank missiles by Morocco, the exemplary cooperation of the kingdom after the Paris attacks and the fact that it is also one of the largest providers of daech recruits? These elements taken one by one may seem innocuous or, in the case of missiles, the sovereign right of that country to arm itself. But seen in the current geostrategic context, they can lead to the most daring theories.

Lets try to analyze these elements, starting from a number of facts and assumptions. First the camp chosen by Rabat in the game in the Middle East political setting, neither neutrality nor alliance. based on the theories of Western countries, Morocco has chosen the radical camp pushing for the removal of Bashar Al Assad, the eviction of Houthi in Yemen with the GCC/ Saudi-qataro-Emirati triumvirate, and placing his army under the command of the UAE command.

Better yet, Moroccan authorities turned a blind eye to the thousands of fighters who leave its soil to join the ranks of the different organizations that are fighting in Syria. They are nearly five thousand, among which a large number of Franco and Belgian-Moroccan elements are found. From past Algerian and Libyan experiences, that took place after the return of their respective fighters from the war in Afghanistan, the Moroccan authorities, have certainly not being keen to letting a vast number of futur djihadist join Syria or Iraq without getting an informal pact with the terrorists for a one way trip to their destination with no return to the kingdom, a territorial non-aggression, and a likelihood of a long-term international jihad contract. The confirmation of the latter statement is perhaps the attitude of the Moroccan services in managing the aftermath of the Paris attacks.

Capitals, among which Algiers, has warned Paris on the possibility of attacks on its soil. But it was Morocco who gave, precise and decisive information that led to the dismantling of the network behind the attack. It is the fact that the DGED has provided temporary hideout to Abbaoud network, which demonstrates the influence this service has on the daech terrorist nebula in Europe. The Abbaoud case is instructive in many aspects, quadruple planner of attacks, multi recidivist against France and Belgium, he remained for over a year, under the influence of Moroccan services that have never “given” him to their European counterparts. His return from Syria and the ease with which he was relocated in Belgium, bears the imprint of a the secret service who provided logistical and travel documents to navigate between the security apparatus cracks. Back to the missile this time. On 18 November, the US Defense Security Cooperation Agency, DSCA, issued a favorable opinion for the sale of 600 mobile anti-tank missiles Tow 2A and 300 launchers to Morocco and for a whopping $157 millions. Out of context, this purchase can be seen as logical.

It would adjust the power balance between the Moroccan and Algerian armies, who, for ten years were in a real arms race. Morocco, with the limited means available, managed acquisitions inexpensively, like that of the old Abrams tanks of the us army, which were refurbished and modernized without a big outlay of cash. From this perspective, Morocco adds firepower to his army in providing the modestly priced means, to neutralize expensive [Algerian] tanks . Still, this weapon has become, on the Syrian theater, the favorite weapon for the various terrorist groups in their fight against SAA , cauing the loss of hundreds armored vehicle and destruction of countless fortifications of the Syrian army.

Gulf countries have transferred from their arsenal, large quantities of Tow to various terrorists groups, which make us think , Morocco, has plans to replicate the scenario in Libya and / or Algeria, where large number of her army units are assigned to monitor the Sahel Libyan. All these assumptions are at the core of the issue upon the return of the thousands of North Africans terrorists and the future of stability of the region.

Previous: what are Putin’s options in a decanting middle east?
Next: An Attempt to Influence US CT Strategy in Africa?