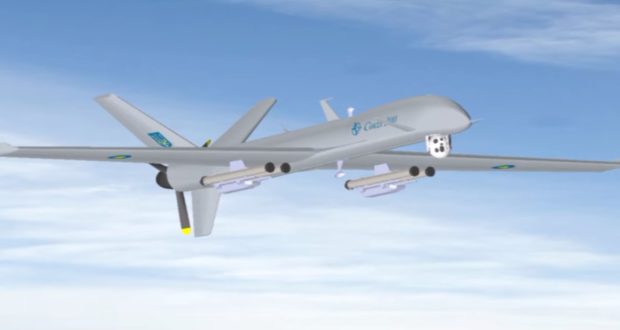 Ukraine, which already has a wide range of reconnaissance UAVs of its own production, is taking active steps to create its own strike capabilities for air-to-ground missions namely: Unmanned Combat Aerial Vehicles (UCAVs), new types of weapons – loitering ammunition (or kamikaze drones), as well as special ammunition for UAVs.

According to experts, the stimulus for the development of UAVs in Ukraine is the current needs of the Armed Forces of this country, which are determined by ongoing measures to counter Russian aggression in eastern Ukraine.

Thus, on July 2, 2020, the Ukrainian “Luch” construction and design bureau announced the development of the first Ukrainian strike UCAV “Sokil-200” capable of carrying up to four guided high-precision missiles.

The UAV is planned to be demonstrated in October this year at the International Exhibition “Arms and Security 2020”, which will take place in Kyiv.

The UCAV can carry up to 250 kilograms of payload – for example, four “Barrier” anti-tank missiles developed and produced by “Luch” construction bureau.

Oleg Korostelyov, General Designer and General Director of “Luch” Design Bureau, spoke about the project of the UCAV “Sokil-200”.

“The level of payload, in this case I mean only the launch systems and the missiles themselves, everything else is part of the of the main unit. That is, we believe that we should be able to carry four missiles, two on each side. Given their weight, it is about 50 kg, it turns out about 200-250 kilograms. This capabilities should be provided by the aircraft. We designed such a device”, said Oleg Korostelov.

According to the head of “Luch” Design Bureau, such a combat aircraft will be able to stay in the air for about a day.

Most likely, the domestic strike UCAV will use a reciprocating or turboprop engine, most probably of Ukrainian manufacture.

“We are going to show the life-size model at the exhibition “Arms and Security 2020 “, said the General Designer-General Director of “Luch” Design Bureau.

It should be added that according to the calculations of the specialists of the Design Bureau, such a UCAV can be developed and adopted in a very short time.

“I believe that it is quite possible that it can be approved for use by the military one and a half years later. Start flying there in nine months, and leave for another 8-9 months for all testing,” said Oleg Korostelov.

According to the developer of the “Neptune” and “Vilkha”  missile complexes, Ukraine already has proven technologies (some of which were actually tested, including during the tests of the “Neptune” rocket complex), which are both financially and technically up to 85 % of the cost of work on the creation of such a strike UCAV.

For instance, currently, the constructors already tested and approved 85 percent of systems and equipment for the new drone. That includes optical electronic lock-on station and payload storages that are now used for helicopters, as well as different systems of flight control, inertial system, engine power system, and the equipment tested on “Neptune” anti-ship missile. 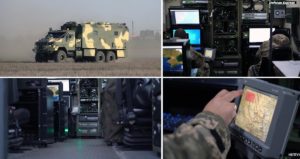 According to Oleg Korostelev, for command and control of the Ukrainian strike UACV it will be possible to use the mobile command post RKP-360 from the RK-360MTs missile complex “Neptune” with necessary completions.

The term which is necessary for the development and all stages of UCAV testing, according to Oleg Korostelyov is a year and a half, and the UCAV can start flying 9 months after the start of this work.

At the same time, other projects are underway to provide the Armed Forces with opportunities for contactless strike of the enemy.

“Hrim” is a new type of weapon – loitering ammunition and combines the concepts of unmanned aerial vehicles and high-precision weapons. Such drones can stay in the air for a while, search for a target and destroy it.

The “Hrim” concept is a precision-guided weapon system that would defeat and destroy enemy targets with minimum risk to nearby civilian lives and infrastructures.

The loitering  munition will be guided semi-automatically by television or IR guidance heads, which will be swappable as needed depending on the visibility and weather conditions. 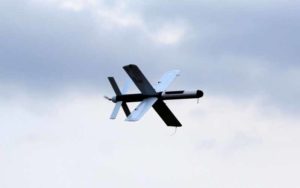 The new Ukrainian “Hrim” smart loitering system has a cruise speed of more than 120 km/h. mass at launch is under 10 kg and can stay in the air for 60 minutes. The system can be launched by an unmanned aircraft system. The round can be launched individually or as part of a swarm.

The munition will be available with warheads of several different types and weights.

Work is now underway on a Fuel Air Explosive (FAE) warhead weighing 3.5 kg, but other warhead types, including inter alia High Explosive Anti-Tank (HEAT) and High Explosive Fragmentation (HEF) are also under consideration for this application. In the future company plans to work also on a shaped charge warhead to be used where there is a high risk of collateral damage.

An optical station with a powerful camera allows you to detect even small targets from a height of more than 1200 m. This allows you to increase the time the drone is in the air and extend the range of stable data transmission, even in conditions of active resistance to hostile electronic warfare.

According to Ukrainian Defense Review, guidance to the target carried out by way of on-board pro-cessing of video signal within the carrier drone, its flight path being updated automatically till impact. The “Hrim” system would use a human operator to locate targets, then operate autonomously till the mission is accomplished. It would be able to operate autonomously while assessing the weather conditions in the target area, approaching the aiming point (with minimum cross-wind component), and diving at the target.

A special feature of the development is the use of a powerful multicopter, which simultaneously performs two tasks – the rise of “Hrim” to the working height of the loitering and the retransmission of the control signal and telemetry. This allows you to increase the time the drone is in the air and extend the range of stable data transmission, even in conditions of active counteraction by enemy means of electronic warfare. 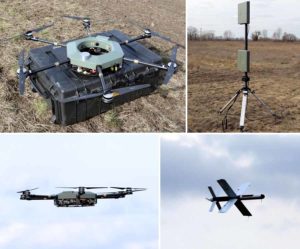 It would be able to operate autonomously while assessing the weather conditions in the target area, approaching the aiming point (with minimum cross-wind component), and diving at the target.

In April 2020, tests of control systems and target detection algorithms were successfully completed.

Video: Loitering ammunition “Hrim” from “Athlon-Avia”: kamikaze drone passed the next stage of testing. During the tests drone control systems and target detection algorithms were tested in various modes. Note that, to save the experimental sample, a parachute was installed instead of the warhead. “Hrim” can be equipped with different types of warheads, high-explosive, cumulative and thermobaric.

In addition, ammunition for combat UAVs is being developed.

Thus, Ukrainian producers are developing  air bombs for drones, factory tests of the new weapon will take place in the near future

The company “SpetsOboronMash” is developing new types of ammunition, which are intended for use with UAVs. The company has completed the development of one of these models – an unguided aircraft bomb, testing of which will begin soon.

The weight of the bomb is 4.2 kg. Length – about 45 cm. The warhead – high-explosive fragmentation with a cumulative effect. The warhead detonator has different detonation modes – above the surface, on the surface or after deepening.

The diameter of the bomb on the warhead – 80 mm. The diameter in the area of ​​the stabilizer is 110 mm. On one side of the ammunition is a connector of the bomb drop sensor with an actuator for separation from the carrier.

The conditions of use of ammunition depend on a number of factors: the height and speed of the drone, meteorological conditions during use, and so on. Algorithms for using the bomb are formed by a ballistic calculator, which is adapted to the tactical and technical characteristics and capabilities of the carrier. 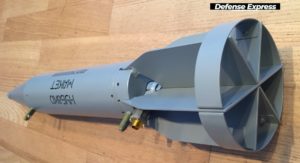 2020-08-02
Akramov
Previous: The latest Ukrainian mobile radar systems for reconnaissance, surveillance and information collection “Tayra” and “Harza”
Next: In 2021, Peru plans to receive the first new military transport aircraft An-178 produced by the Ukrainian company “Antonov”