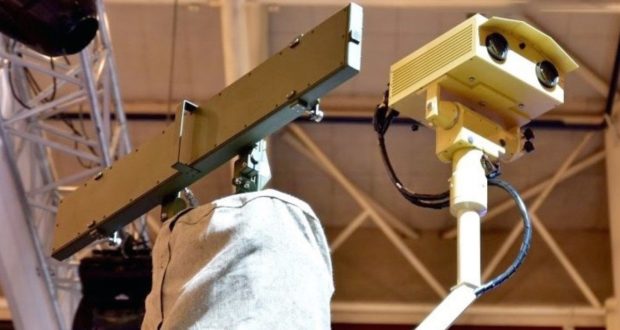 The alternative designation of the systems is – mobile  Perimeter Security Surveillance Radar (PSSR).

The systems have been developed by the “PROGRESS” company, in a collaboration with the Ukrainian Academy of Sciences’ Institute of Radio Astronomy.

These systems can be useful for the customers in the Middle East, North Africa and Sahel region, especially given the large area of ​​desert territory, the length of the borders.  At these conditions the systems allow to protect and ensure the security of remote posts and garrisons (Sahara, Sahel), critical infrastructure in remote areas (mining industry, oil and gas industry), automated border protection.

At the same time, in the light of the world spread of the UAVs use for attacks (both in traditional wars and by members of terrorist groups, smugglers etc.), an important feature of the complexes is the detection of various types of UAVs, including small low-flying UAVs.

More about these systems.

The main difference between the two systems is the use of different types of mobile platforms (fully autonomous  – “Tayra” or trailed “Harza”), on which the system is mounted and this in order to perform tasks that are traditionally faced by civilian services or military units. This involves reconnaissance, protection of important installations, strategic infrastructure or detection of small unmanned aerial vehicles. 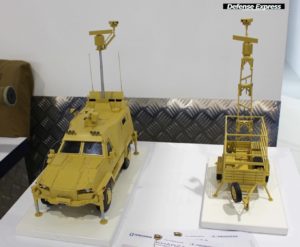 The systems provide the operational capabilities for the following:

– visual/audio alarm signal generation if an incoming target|threat is detected;

The results of the participation of these systems in international tenders prove that they an effective, adequate response to the most challenging threat posed by unmanned aircraft that are designed to deal with a wide variety of tasks ranging from reconnaissance, surveillance, and intelligence gathering to surface-to-ground attacks.

A drone threat cannot be neutralized or destroyed before it is detected and its position is accurately localized.   But this, as it turns out, isn’t so easy to achieve. 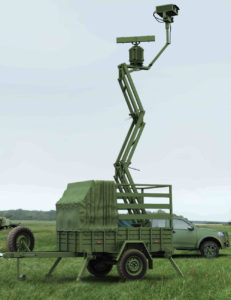 The systems provide automatic detection and classification of moving targets, including small-size (low-Radar Cross-Section) flying targets while flying at 10-15 to 600 m altitudes

The Harza and Tayra technology team have been able to handle all the challenges pretty well. Having completed the required trials and evaluation cycle, the “Harza” PSSR has already found markets both in and outside of Ukraine, thus proving its high competitive ability.The larger the Radar cross-section (RCS) of a given target, the easier it is for a radar to detect the target. Relatively large aircraft and UAVs have larger RCS and hence are more visible to a radar. But the threat detection problem is seriously complicated where the threats are modern, low-RCS combat UAVs and especially quadcopter drones built with an extensive use of plastic materials. Furthermore, targets like e.g. quadcopter drones are designed such as to fly at low speeds, making their detection even more challenging.

The new radars are effective against targets in the air, on the ground, and at sea. In particular, it can detect a small, 0.01 sq.m. RCS drone from 7 km, a human being from 18 km, and a vehicle-sized target from 30 km away while being able at the same time to automatically track up to 200 targets simultaneously. 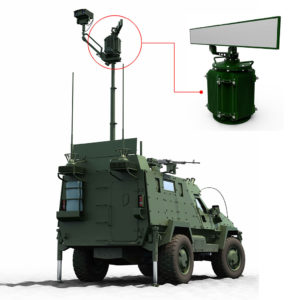 “Tayra” system is mounted on cars or armored vehicles 4×4, equipped with outriggers.

In addition to the radar channel, the operator can use optical and thermal imaging devices to monitor the detected targets – including in automatic mode.

The software allows the operator to coordinate the work of different channels for priority targets, which were first detected by radar.

To determine the altitude of air targets, the radar can optionally be equipped with an additional module.

The radar output data can be integrated with geographic information system (GIS) data to allow all weather, 24-hour security surveillance of a facility’s perimeter, territory, and approach routes.

One of the advantages of the perimeter security radar system in the Harza version is its compact design. The system is mounted on a single-axle car trailer, to facilitate fast, low visibility movement. 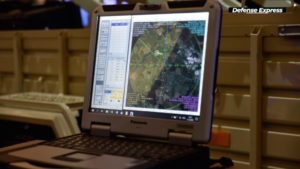 If needed, the mobile complex can be easily installed as stationary without any changes in its characteristicsThe system, among other things, is designed to protect strategic objects (such as headquarters, communications, warehouses and bases for weapons and military equipment, power plants) from attack by sabotage groups and drones. The Harza system takes just 10 minutes to go from stowed to operational readiness configuration.

In its turn, “Tayra” system is mounted on cars or armored vehicles 4×4, equipped with outriggers. The type of armored vehicle is determined by the customer. “Tayra” can be considered as a reconnaissance vehicle to perform the full range of tasks of combat support for the needs of ground forces or special forces.