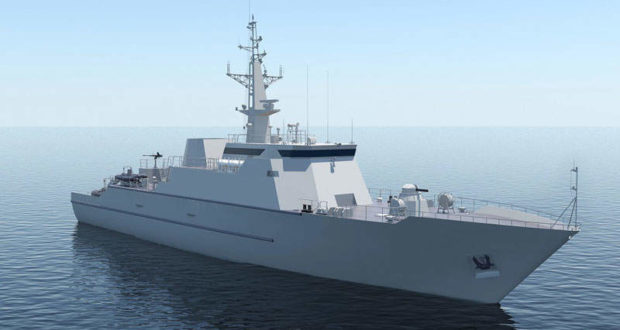 The fifth Project 12700 Alexandrit mine countermeasures ship has been launched in St. Petersburg, Russian Ministry of Defense reports. The ship has the biggest in the world hull made of monolithic fiberglass formed by vacuum infusion.

Today, on April 28, at the Sredne-Nevsky Shipbuilding Plant (part of the United Shipbuilding Corporation), the launching ceremony of the mine countermeasures ship “Pyotr Ilyichev” of project 12700 took place.

In his speech to shipbuilders, the Commander-in-Chief of the Russian Navy, Admiral Nikolai Evmenov, noted that “Sredne-Nevsky Shipbuilding Plant has fully mastered the serial construction of Project 12700 mine countermeasures ships, which are distinguished by excellent characteristics in their class and have repeatedly proved this, performing a wide range of tasks in the composition of the Navy ”

“The main command of the Russian Navy is considering the possibility of ordering another series of mine countermeasures ships of project 12700. There are never too many ships … I think we will additionally order a series of these ships. They respond to challenges and threats at sea, “said the Commander-in-Chief of the Russian Navy, Admiral Nikolai Evmenov, at the launching ceremony.

The Commander-in-Chief of the Navy also stressed that “the ships of the project” have a large modernization potential. When creating Project 12700, the most advanced technologies were used and these ships have no analogues in the world.

Project 12700 was developed by the Almaz Central Marine Design Bureau (part of the United Shipbuilding Corporation) for the Russian Navy. These ships belong to a new generation of mine-sweeping forces and are designed to combat sea mines, which the new mine countermeasures ships ships can detect both in the water of sea areas and in sea soil, without entering the danger zone. To combat mines, ships can use various types of trawls, as well as remote-controlled and autonomous unmanned underwater vehicles.

When building such ships at the Sredne-Nevsky shipyard, the latest Russian technologies are used, which have no analogues in the world shipbuilding. The ships of this project have a unique, largest in the world hull made of monolithic fiberglass, formed by vacuum infusion. The mass of such a case is much lower than that of a metal one. At the same time, its strength increases significantly. Such a case is not afraid of corrosion, and the service life, subject to operating standards, is unlimited.

Specifications of the export version 12701:

2021-04-30
Akramov
Previous: “Europe Urgently Needs a Geopolitical Purpose”
Next: Russia demonstrates the live-fire drills of S-400 and Pantsir air defense systems to the representatives of 52 countries