Home 5 Military Industry 5 Rostec to present the BT-3F, an amphibious armoured personnel carrier with a remotely-operated weapon station, at Army-2019 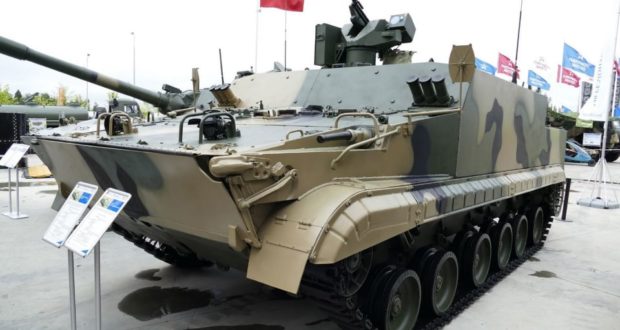 Rostec to present the BT-3F, an amphibious armoured personnel carrier with a remotely-operated weapon station, at Army-2019

Rostec State Corporation will make the first presentation of BT-3F, an amphibious armoured personnel carrier with a remotely-operated weapon station (WS), at the International Military Technical Forum Army-2019. The new WS is equipped with a dual-plane stabilised platform and a 12.7 mm Kord machine gun.

The WS has a gyroscopic system for aiming sight and weapon stabilisation to hit targets in motion and afloat. It has a laser rangefinder, a thermo-vision aiming sight functionality, built-in system diagnostics and a cartridge counter indicating when the ammunition runs out. The machine gun elevation angle has been increased to minus 10 degrees to fight targets located on hill slopes.

The BT-3F on a BMP-3 chassis is designed for transporting marine, coast guard and ground forces and provides fire support for dismounting troops in any type of combat operations. It can transport 17 people, including crew members. Its driving compartment accommodates the driver, while the assistant commander and the paratrooper, stationed on the left and right sides, are able to use machine guns from their autonomous locations.

For this armoured personnel carrier, Rostec’s subsidiary High Precision Systems holding company developed energy-absorbing folding armchairs that significantly reduce the shock load in case the carrier is blown up by a land mine or has to move across a rough terrain. Its seats have seat belts for the security of the crew and troops, and it is equipped by a modular compressor-operated air conditioner for operations in tropical regions.

Rosoboronexport signed the first supply contract for the BT-3F with the Ministry of Defence of the Republic of Indonesia in April this year.

Rostec is a Russian State Corporation established in 2007 with the purpose of facilitating the development, manufacture and export of high-tech industrial products for both civil and military purposes. It incorporates over 700 entities that currently form 11 holdings operating in the military-industrial complex and 4 holdings active in civil industries, as well as over 80 directly supervised organizations. Rostec’s portfolio includes such well-known brands as AVTOVAZ, KAMAZ, Kalashnikov Concern, Russian Helicopters, VSMPO-AVISMA, Uralvagonzavod, and others. Rostec companies are located in 60 regions of the Russian Federation and supply products to the markets of over 100 countries. According to Rostec’s Development Strategy, the mission of the Corporation is to ensure Russia’s technological advantage on highly competitive international markets. One of Rostec’s key goals is to implement new technological way of living and to promote digitalization of Russia’s economy.

2019-06-19
Akramov
Previous: Ansat to get Austrian medical modules
Next: Rostec Developed the First Supercomputer Based on the Elbrus Processor