Home 5 Middle East 5 Are the United States of America preparing for nuclear war in Syria?

Are the United States of America preparing for nuclear war in Syria?

Apart from the “classic” deployment of aircraft carriers, guided missile destroyers and cruise missile laden submarines, the USA have in this instance sent, in a preemptive fashion, equipment and systems never used in past conflicts, not even during the Gulf wars. Such systems are not offensive and are built to survive a nuclear holocaust; hence, their role is to insure the proper functioning of vital communications and of the surveillance systems of the United States Armed Forces. On 28th of August, the USAF deployed in Incirlik (Turkey) the Boeing E-4B, its “Doomsday Plane”, meaning “The End Of The World Plane”. 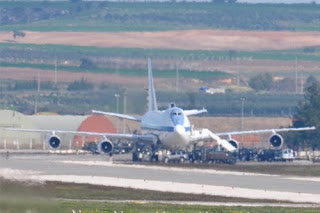 That airplane also named the “National Airborne Operations Center” (NAOC) when in action, was designed to allow the POTUS (President of the United States), the Secretary of Defense and the Joint Chiefs to “manage” a nuclear war from the air. The Boeing E-4 Advanced Airborne Command Post’s main asset is its ability to resist the Electromagnetic Pulse (EMP) generated by a nuclear explosion while safeguarding its ability to communicate. This airborne command post possesses the capability to emit on all possible frequencies, on the totality of military and commercial telecommunication satellites, as well as the internet via the way of IP. The E-4B is also designed to establish radio links with submerged nuclear submarines and relay orders to launch nuclear missiles.
The presence of the E-4B in this theatre of operations is a clear indication of the United States’ will to counter a nuclear “low blow” and/or the use of an electromagnetic pulse device by the Syrian Army as well as by other allied armies who would attempt to burst the bubble of surveillance and telecommunication of the US Armed Forces in that zone and render it useless. Another explanation for the E-4B being in Incirlik could be that it is carrying the US Secretary of Defense BUT! The presence in that zone of a WC-135C Constant Phoenix, platform that allows the detection of radioactive particles in the atmosphere negates the possibility of the E-4B as a VIP transport; other planes could and would fulfill that benign role. The sudden arrival of these two airborne systems (the E-4B and the WC-135) in this battle zone demonstrates that Uncle Sam fears a “low blow” sauce that would be nuclear flavored.
The probability that Syria has nuclear weapons is extremely low. Nonetheless, Syria’s allies, the Russians, have them and the Iranians are on the threshold of possessing them. So, from the point of view of the US, the most plausible scenario is that the Assad regime in a last desperate gambit, would massively use chemical and biological weapons against Turkey and Israel. The Jewish State’s response to such an attack would be to use its nuclear arsenal. The situation is more complicated than it seems. Even if the US would limit its attack to launching 200 Tomahawks and conducting 20 or so sorties with their B-2 bombers, the reaction of a cornered Al Assad clan runs the risk of having devastating consequences for the whole region.
Traduction Tewfik B

Previous: Ex Belarussians Su 24 finally sold to Sudan
Next: View from Washington regarding Boko Haram: Is it a FTO?

Cairo will buy a spy satellite from …. Russia

View from Washington regarding Boko Haram: Is it a FTO?