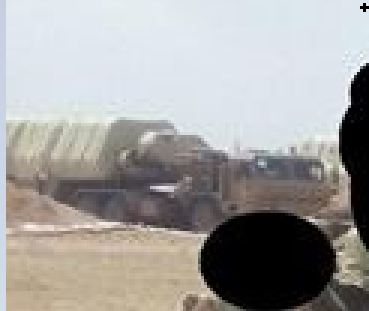 We announced more than two years ago, the desire of Algeria to acquire the long range S 400 air defense system from Russia. A contract for such system has been inked one year ago.

Today we are able to provide you with the first pictures taken in Algeria of an operational regiment S 400. They were made during the the first tests of the system that was received in spring.

If the details of the contract were never been revealed, there is a believe that it comprises three to four regiments. A casual look at the satellite imagery on the number readied for the S300 and S400 gave a good estimate of the number of S 400 systems acquired.

The Air and land defense force Command operates three regiments of S300 PMU2 since 2003, located at the center, in the west and southwest of Algeria, they cover almost all of the North, the Algerian-Moroccan border and the coastal strip. The arrival of the S400 will not only fill gaps in the air defense but will saturate the long-range air surveillance. 1-Photos irrefutably show S400 launchers that differ from those of S300PMU2 , which is BAZ-64022 vehicle not the KrAZ-260 of the PMU2 2- 8 launchers aligned on a picture and three during the test on a second. In reality, the Algerian army has undertaken an overhaul of its DAT and the appearance of S400 in his arsenal is only part of modernization.

As recently as last week the Russian media confirmed the purchase by the PNA BUK M2 batteries, medium-range missiles but especially a specific request of a network of detection capabilities comprised of the Russian Kasta radar coupled with the 2E2 close protection systems of the Pantsyr S1 and the Buk M2. This onion skin configuration, unifies the capabilities of the various radar systems. Kasta The 2E2 is already integrated with S300 and S400, and allow different units to operate without detection and linked to independent units. The system has an effective detection range of 400 km and capable to destroy a target at a randge of 240 kms with the 40N6 or 48N6 missiles. The spatial Radar 92N6E, can identify up to 100 targets simultaneously over a distance of 400 km. In addition to the distances of engagement and increased performance, the main difference with the S300 PMU2, it is its ABM nature which makes it a formidable weapon. If the acquisition is confirmed, Algeria officially became the first export customer Triumf.

Previous: Terrorism in the Horn of Arica: What about Tanzania?
Next: what are Putin’s options in a decanting middle east?