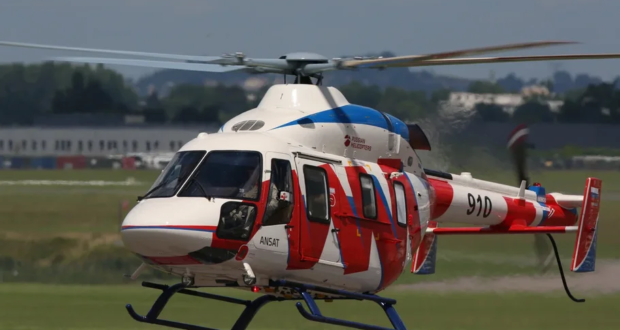 Russian State Corporation Rostec has handed over the first batch of aviation equipment – four Ansat helicopters and four Mi-8 helicopters in medical configuration – to the country’s National Air Ambulance Service (NAAS). By 2021 Rostec will supply the NAAS with 104 Ansats and 46 Mi-8 with medical modules.

The delivery of the aircraft, in a special color and modified appearance, took place at the flight test complex of the M.L. Mil Moscow Helicopter Plant in the village of Tomilino, Moscow region. The event was attended by Russian Health Minister Veronika Skvortsova, Industry and Trade Minister Denis Manturov, and Rostec head Sergey Chemezov. As part of the event they held a meeting on the development of air ambulance, which was attended by the heads of the regions of the Russian Federation.

The supplied helicopters are literally flying ambulances fully equipped with modern equipment for diagnostics and medical care during flight, including a special module with life support systems for transporting newborns. The helicopters will serve in St. Petersburg, as well as in the regions of Amur, Leningrad, Moscow, Tver, Novgorod, Novosibirsk, Magadan, Sverdlovsk and Khabarovsk Territory.

“The development of the air ambulance, as well as the entire ambulance system, is a high priority for the Ministry of Health of the Russian Federation. Effective medicine in the 21st century is unthinkable without air ambulance. Medical helicopters and airplanes not only provide emergency assistance in remote and hard-to-reach areas, but are also an important part of the ambulance system in large cities, with their heavy traffic and traffic jams. The air ambulance already operates in 45 regions of the Russian Federation, the immediate goal is to make the air ambulance available to every citizen of the country,” said Health Minister Veronika Skvortsova.

The NAAS plans to carry out over 15,500 evacuations per year with a subsequent increase in the number of services. By the end of 2021, the NAAS fleet of aircraft will be able to fly throughout the country under sanitary assignments. This will help make high-tech medical care more accessible and significantly increase the number of saved lives, thanks to emergency medical aviation.

“In May 2018, the President of the Russian Federation ordered the diversification of military-industrial production enterprises. Implementation of this complex project will make it possible to exploit the capacity of aviation industry enterprises through 2020 with civilian products of great social significance. Large-scale deliveries of helicopters as part of the national Healthcare Project contribute to a significant renewal of the fleet of aircraft involved in the air ambulance operations in the regions,” said Minister of Industry and Trade Denis Manturov.

A project to create a single air ambulance operator provides for the creation of 130 aircraft-bases, a network of mobile fuel-filling complexes, and helicopter pads at more than 1,500 health facilities.

For the uninterrupted operation of the system, the activity of air ambulance services will be synchronized with the emergency call systems in the regions of Russia, as well as with the Unified State Health Information System.

“Rostec enterprises produce modern aviation and medical equipment, provide related services, and have extensive experience in building digital and ground infrastructure. In short, they have all the competencies for the integrated implementation of such a large-scale project. The creation of the NAAS is intended to improve the quality of life for people on the ground, and introduce new standards in the field of medical aviation. The project also contributes to the diversification of defense enterprises and the growth of civilian production. The planned volume of investment in the renewal of the medical aviation fleet will be about 40 billion rubles [[over $605 mln]],” said Rostec CEO Sergey Chemezov.

The federal project for the development of the air ambulance is being implemented by the Ministry of Public Health and the Ministry of Industry and Trade on the instructions of the President of the Russian Federation. Rostec has been active in the project since 2016. At the moment, the Russian Helicopters holding company has delivered 60 aircrafts with a medical module to the Russian regions. They have already made more than 12,000 flights transporting over 17,500 patients, including about 3,000 children.

As previously reported, the project to create the NAAS was initiated by Rostec in 2017. In January 2018, the initiative was supported by Russian President Vladimir Putin. At the end of last year, in accordance with a Russian Federation Government Order, the NAAS was named the sole provider of medical aviation services in the country’s regions.

At the moment, the service is operating in St. Petersburg, the regions of Moscow, Leningrad, Sverdlovsk, Novgorod, as well as the Republic of Karelia.