At present, taking into account the high-tech nature of the latest wars and conflicts, global developers pay considerable attention to the development and production of targeting and guidance systems for the weapon systems. Within this trend, recently Ukraine has presented a line of new “thermal” targeting/guidance systems for guided missiles and an optical aiming station for various types of weapons.

A line of new “thermal” targeting/guidance systems for guided missiles

According to the “Defense Express” resource, the Ukrainian company “Radionics” has made a technological breakthrough in the creation of new optical targeting/guidance heads that can compete with the world’s best solutions.

The company has completed the development and production of a line of new optical targeting/guidance heads.

The developed means are intended for equipping high-precision missiles of the “air-to-air”, “ground-to-air” and “ground-to-ground” class. At the same time, it could be integrated with both ukrainian and foreign types of missiles.

The new optical targeting/guidance heads are designed to capture the target by thermal imprint (the infrared range – from 3 to 5 microns), its auto-accompaniment and the issuance of autopilot control signals necessary to ensure independent self-guidance of the missile at the target.

One of the developments is GSN-203T. 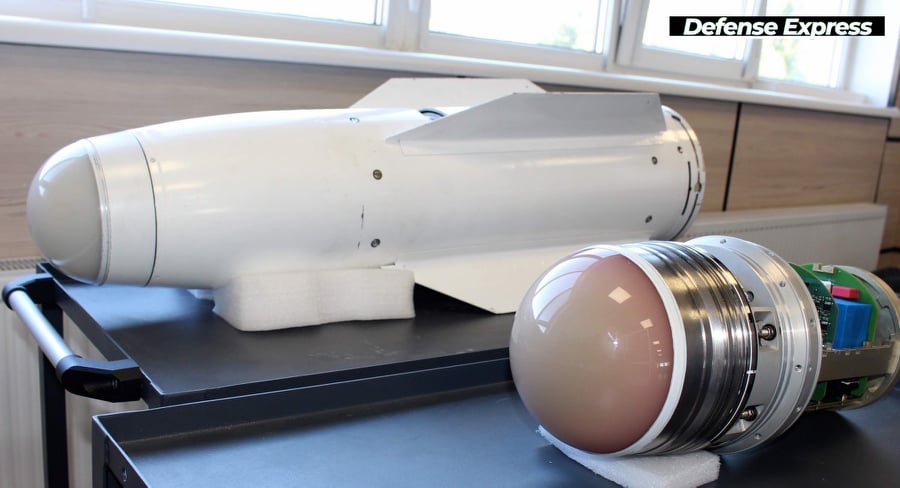 Structurally, the GSN-203T consists of two main components: an electronic unit and a gyro turn coordinator (which includes an image device with a matrix cooled photodetector, which is mounted on a gyrostabilized platform). Modern element base, materials and technologies are used in the manufacture of GSN. 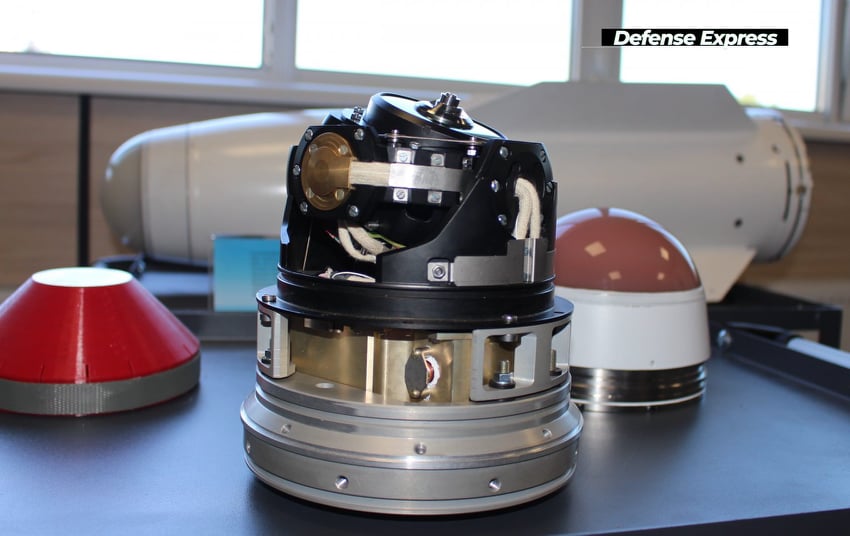 GSN gyro turn coordinator, which includes an image device with a matrix cooled photodetector, which is mounted on a gyrostabilized platform.

All new targeting heads from the “Radionics” company, as well as GSN-203T – are matrix type targeting and guidance systems. This design solution was applied and implemented in Ukraine for the first time. For example, since the times of the USSR, R-27T/ET aircraft missiles have been equipped with a thermal targeting head with a single-channel photodetector, which was manufactured according to the technological capabilities of the last century. And, in fact, to put it very simply, the targeting head of these missiles perceived the thermal radiation of the target as a single point. This significantly limited the missile’s ability to perform the task in conditions of even primitive thermal interference from the enemy.

The principle applied in the new targeting systems of “Radionics” are much better. GSN-203T uses a sensitive matrix to detect and capture the thermal signature (in other words, a unique thermal image or imprint) of a specific target. This allows not only to detect targets with thermal signature at much greater distances, but also to implement complex algorithms for preventing the interference that could be used by the enemy against the missile. A missile equipped with such a targeting system has significantly increased likelihood of hitting a target.

Also, according to the director of “Radionics” Stanislav Zavyalov, the new development allows to implement the concept of work on “target’s image”. The software and hardware potential of the new GSN is quite suitable for this.

If we talk about the use of the R-27 aircraft missiles with thermal targeting systems from MiG or Su fighters, previously the pilot with the help of an integrated optical laser station (OLS) could detect an enemy target at a range of 90 km. However, the thermal targeting head of the missile could capture this target at a much shorter distance, because the photodetectors in the targeting heads of Soviet missiles lacked sensitivity.

GSN-203T has changed that. Its sensitivity is equal to the range of target detection by the integrated optical laser station (OLS), which is installed at the aircraft. Now, immediately after detecting the target, the pilot, without waiting, can switch to the mode of capturing the target with the targeting head and launch the missile in the “shoot-forget” mode. This significantly enhances the combat potential of the fighter, “- said the representatives of the company” Radionix “.

It is noteworthy that the new GSN targeting head already has orders from several foreign companies. The next batch of new optical targeting heads has been ordered by a foreign buyer for testing as part of his own products. Therefore, “Radionics” expects that in the near future their GSN targeting systems will be tested as part of high-precision weapons of foreign production.

The new GSN can be adapted to any guided missile, where the principle of aiming at the thermal signal from the target is applied. The diameter of the GSN could be from 180 mm and more. In case of special need, it is possible to produce GSN in smaller diameters.

And the fact that the GSN-203T is made in a diameter of 220 mm – is also not accidental. “Radionics” aims to ensure that this new GSN can completely replace the outdated GSN-36T with much worse performance used on R-27T and R-27ET aircraft missiles.

R-27 missiles are manufactured at the Ukrainian “Artem” State Company. This Kyiv-based company has been a serial manufacturer of medium / long-range air-to-air missiles for MiG-29 and Su-27 fighters since Soviet times.

R-27 missiles have a modular design – with different types of targeting heads (radar semi-active and passive, as well as thermal) and with different versions of engines. The “Artem” plant exported thousands of R-27 missiles of various modifications. 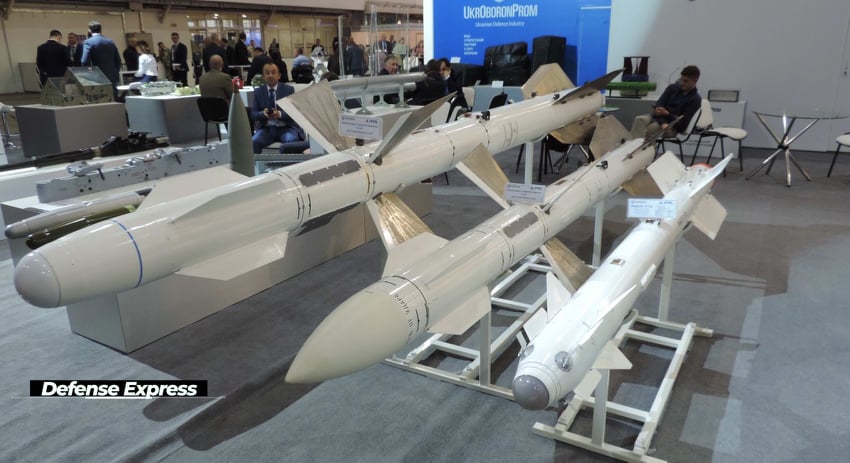 It should be noted that today “Radionics” has scientific, technological and production competencies and capabilities for the development and manufacture of both radar targeting heads (active, semi-active and passive) and optical targeting heads for guided weapons. “Radonics” new radar targeting systems are already being used in new SAM missiles, as well as in the “Neptune” anti-ship cruise missile. 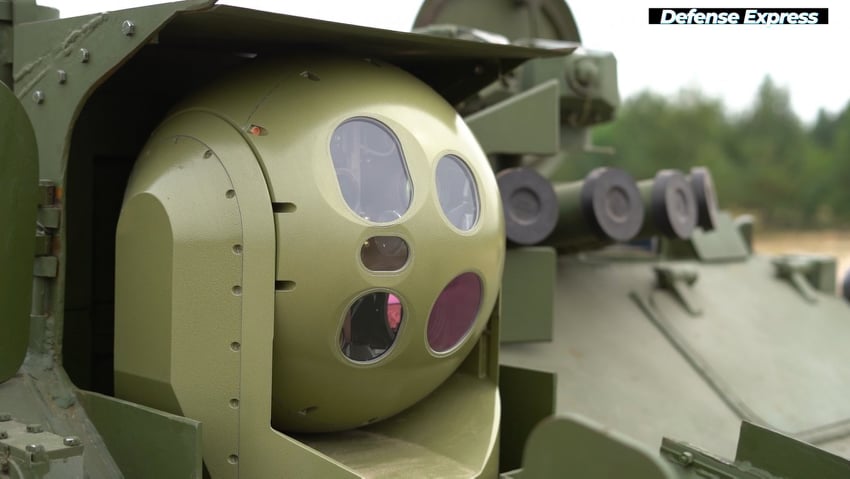 According to “Defence Express” resource, in September 2020, representatives of the Ukrainian military-industrial complex announced that the Ukrainian army would soon be equipped with a unique domestic development – an optical aiming station “OPSN’, which was created by the ‘Izyum Instrument-Making Plant’ in cooperation with the ‘Luch’ design bureau.

This station, as part of the modernized self-propelled anti-aircraft missile system “Shturm-S”, is currently being tested at military training grounds. And thanks to its modularity, it can be easily integrated into helicopters, drones, marine and ground equipment such as armored personnel carriers, infantry fighting vehicles or tanks.

Optical aiming station OPSN will be the basis for a range of stations for various types of military equipment.

OPSN is the result of cooperation between the “Izyum Instrument-Making Plant”, which designed the station, which includes three TV channels, a thermal imaging channel, a laser rangefinder, a laser anti-tank missile control channel, and “Luch” design bureau, which took over the stabilization and integration system as well as the system integration to the deeply modernized self-propelled anti-aircraft missile system “Sturm-C”. 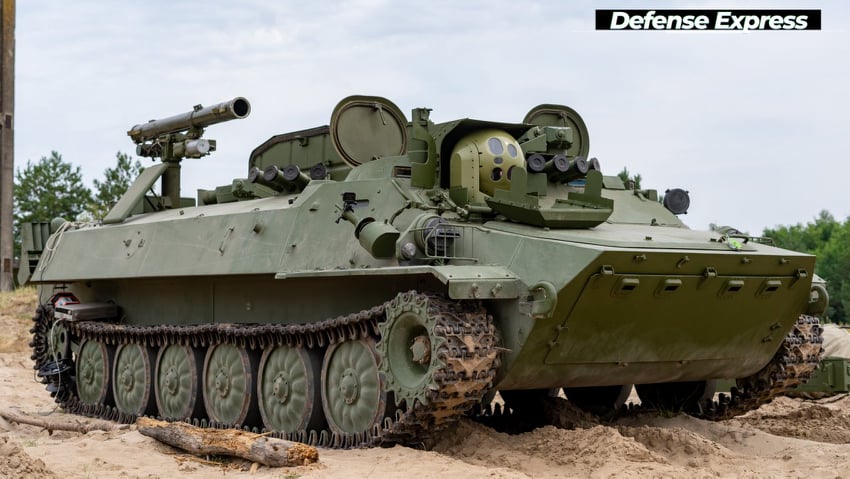 OPSN as a part of the modernized “Shturm-S”

“The peculiarity of OPSN is that it was subject to serious requirements. The range of the missile – 7 km, the target detection range, both in television and in the thermal imaging channel, as well as the range of the laser rangefinder – 12 km. In addition, to increase targeting accuracy a four-circuit stabilization system is used in the OPSN. Thus two stabilization circuits are used in each dimension, which makes it possible to fire while moving.

OPSN is a polyvalent station. It can be used both on land and at sea without changes. And for the air platform, you need to perform a simple procedure – turn the control field and camera images 180 degrees. Also the aiming station of the air version is equipped with more powerful optics, which will detect targets at a distance of 15-20 km.

Previous: Ukrainian counter-battery warfare means
Next: Russian troops will recieve the Okhotnik in 2024