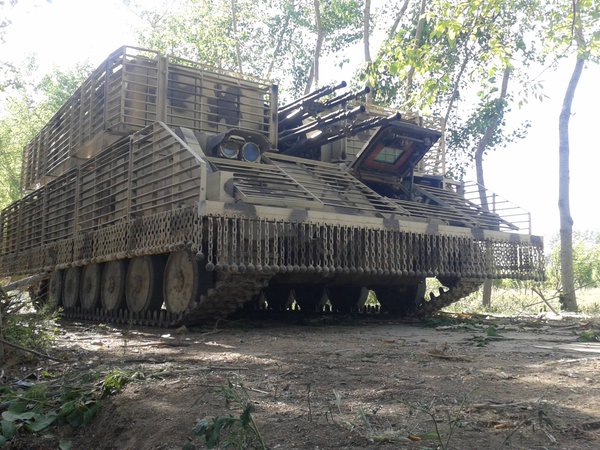 As part of analysis of the data from the field, from the war in Syria, to which we will devote a long record in the near future, we wanted to address a critical issue, The self-protection systems for vehicles in Syria.

The war in Syria has been a disaster for the armored vehicles division of the Syrian Arab Army who lost several thousand tracked or wheeled vehicles. Very badly used at the beginning of the war, the T72, despite its protection with detonating reactive ERA bricks (Russian or Italian models) suffered countless losses, mainly due in this period to non-guided anti-tank missiles, like the RPG 7 and 29 or older versions of wire-guided ATGM as AT3 or AT4. The optimization of the use of the MBT (heavy tanks) by the SAA, who, in the midst of the war, started to operate under aerial coverage or fire saturation of classical and artisanal artillery (like the Burkan rocket) or with Shilkas in an urban environment, was unable to stop the losses, especially after the massive influx of IR or Laser anti-tank guided missiles from countries Who’s sponsoring terrorist groups, rebels militias and Daesh.

Tow, Kornet, Metis M, have flooded the Syrian theater (also on the side of SAA, which received Iranian copies of the TOW) to the point that the use of ATGM has spread to the attack against the buildings and groups of infantry on both sides of the front lines.On the side of Daesh and other rebel groups and despite the many taken from armored vehicles and tanks wars, their use has never been conclusively by lack of experience and collective training. Daesh worked very quick to convert its fleet of BMP for example to SVBIEDs which are much more effective as a siege weapon that a maneuvering weapon.

The first armored vehicle modification attempts to protect began early in the war, by adding armor plates or cages to detonate the explosive charges of missiles and other rockets outside the shielded compartment. This change will give the T-72 “Adra” and the Shilka “Oryx” in the SAA side and similar changes on the side of Daesh. BMP, too fragile and unable to support the explosion of reactive bricks has not undergone major changes apart from the addition of cages. Despite the structural changes, the MBT and other armored tracked Vehicle continued to suffer losses because of modern ATGM. The arrival of the Russian army and sending T90 on Syrian theater introduced the first active armor protection systems, the system Shtora 1. In parallel, it seems that the Syrian Arab Army was successful, around May 2015, to develop a laser and IR jamming system, which would be called Birdcage or birdhouse. 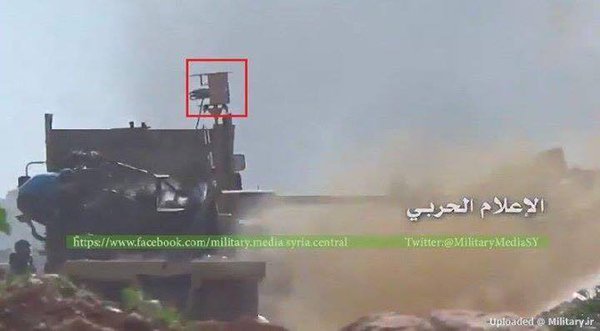 This system, now widespread in much of the SAA vehicle fleet, seems to give good results. Consists of a sort of barrel mounted on a mast containing multiple sensors and powered by the vehicle, the system covers around 220 ° (the front and sides of the vehicle), its mission is to blur the IR signal that directs the missile to its target. Same concept for Russian Shtora which combines Laser and Ir interference with the detection and shooting Countermeasure or smoke bombs to destroy the rocket in flight.

A video released today demonstrates the effectiveness of this system. The shooting angle and distance do not allow to give some description of the incident but allow to emit two assumptions. But before to study them let’s start with what is visible and quasi factual: the targeted T-90 had the tank commander hatch open, he was occupied, the 12.7mm teleoperated cannon was in use. After the explosion, the tank has not suffered a structural damage and has probably not moved. Thejamming system was probably not on, it turns red when it is.

First hypothesis: the missile made its way to the tank and was touching the T90 in the middle of the tower, just above the cannon, reactive bricks did their job and prevented the rocket from penetrating.

Second hypothesis: the missile was destroyed before it reaches the tank, the sensor system has detected the trajectory and detonated the era brick projecting debris that have prematurely detonate the rocket. In both cases, the defense system (active or passive) has allowed the protection of the tank and maybe rescue the crew.

In conclusion, the Syrian war has shown that the Soviet doctrine that does not skimp on the waste of men in battle, had lived. After five years of high intensity asymmetric warfare the SAA, which has lost a lot of of his men start thinking about their preservation.

Previous: Could ISIS be forming a New Cell in Central Africa?
Next: Preview of Upcoming Events?