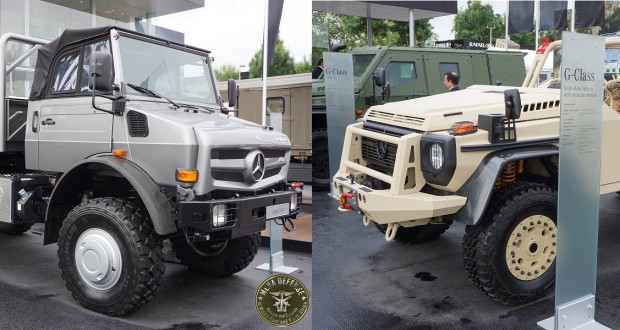 The level of cooperation between Daimler-Benz and Algeria is outstanding according to the marketing and Communication officers of the German auto giant.

The design bureau for the manufacturer, encouraged by the Algerian specific vehicle needs, has recently put in motion, plans to produce two concept vehicles, one of which is a new version of a vehicle that is already been in use for decades.

The vehicle is a modernised version of the famous Mercedes off road light truck, has been specially designed for air lift and rapid deployment with a folding canvas covered cabin, and powered by a 218 HP 4 cylinder engine. The Unimog is considered to be the cheapest vehicle to operate for years. Some models are still used in some armies after 70 years in operations. The truck was widely used by the ANP in the 70s in his transport and ambulance versions and showed great qualities and durability especially in off road environments.

MRV or Multi-Role Vehicle, is a version of the G-Class Mercedes 4×4 ( 37 years since first produced)), is also the result of the expectations of the ANP. Although it has not yet been officially ordered by Algeria, it is likely to equip special forces and and army patrols squads in a near future. It should not be confused with the MRV of LIV Serval Rheinmetal which is in service in Germany and Switzerland. The MRV is a desert adaptation of LAPV 6.1, an adapted armored vehicle based on the G-Class, the MRV shares the same chassis and the same mechanics as the LAPV 6.1, although the MRV has larger wheels,longer wheel base and a higher pitch angle. It has a modular armor, to protect the crew and offers further protection against mines. It is designed for multi use, from deep recon to casualty evacuation.

2016-06-24
Akramov
Previous: Fuch’s first maneuvers in Algeria
Next: The Issues that Turkey struggle with