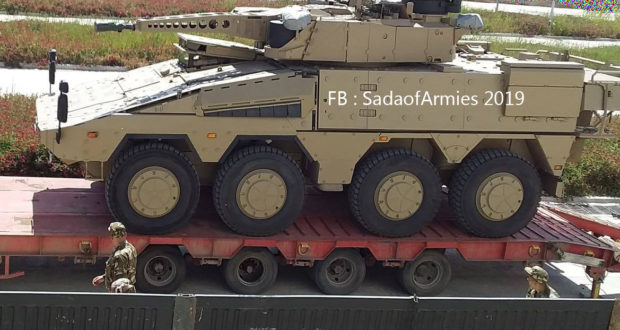 During the first week of August 2019 in an Algerian shipyard, a RORO ship arrives at the end of the day and unloads about thirty anonymous containers and two huge armored vehicles hidden under thick khaki tarpaulins. The transport convoy starts immediately after unloading, direction Constantine in the northeast of the country.

The few witnesses around managed count the wheels of the huge machine well camouflaged: eight wheels. The containers, in fact, are full of CKD kits that will be used to build Boxer IFVs. It is official, the Fuchs manufacturing and assembly plant in Ain Smara 10 km from Constantine, will launch the production of the German 8×8 IFV, after several years of silence around the project.

The machine had undergone a battery of tests in May 2019 in the test polygon of ​​M’Doukal in the wilaya of Batna (East), then later in September in the test area of ​​Djanet in the South.

According to the user’s feedback, the 8×8 IFV really impressed the Algerian army with its robustness, firepower, agility and its huge armor.

Algeria has been interested in Boxer since 2015 just after the launch of the production of Fuch 2. In 2015, the ANP ( Armée Nationale Populaire) received a test copy that will make the parade on January 31, 2018, under the eyes of the Algerian CHOD.

Germany allegedly suffered from a lot of internal and external political pressure not to supply this armored vehicle to Algeria. That can explain the total secrecy around this delivery.

In 2011, Algeria signed a $ 14.6 billion contract with German companies to help build a military-industrial base and re-equip the navy.

The Boxer IFV is probably the best armored vehicle in the world in its category (and the most expensive), its production in Algeria could reach 500 units by 2023.

It is a modular platform that could be transformed into nine combat variants (Ambulance, troop transport, cargo, command post, engineering vehicle, combat vehicle …) and has the self-protection system. Active Defense System (ADS).