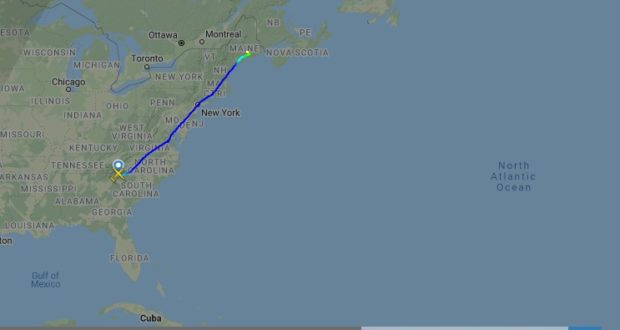 The Algerian Air Force is about to receive its first new generation C-130J transport aircraft, which left the Lockheed Martin factory in Greenville, South Carolina, today and made its first stop in Bangor, Maine.

The aircraft with the registration number 7T-WJA, which still flies under the U.S. flag under the registration number N5103D should arrive tomorrow in Algeria while it was ready and waiting for delivery since March 2021. As a reminder, the C-130J delivery contract has been under negotiation for more than six years, and is being scrutinized by the U.S. Congress for the validation of sensitive equipment exports.

Highly anticipated by the Algerian army, which is currently renewing its fleet of cargo aircraft, the WJA will arrive tomorrow, January 22, against a backdrop of controversy and crisis between Algeria and the American aircraft manufacturer, which has allegedly taken a few shortcuts to start delivering aircraft.

While the contract was for new aircraft, Lockheed Martin has, in the case of the WJA, militarized its LM-100J demonstrator, the civilian version of the freighter proposed by the aircraft manufacturer, a demonstrator that had made its first flight on June 30, 2017 and has been overused since.

For the record the contract, officially signed in 2018, covers the delivery of 4 C-130Js with 4 others as options. Tunisia was the first operator of the new Hercules in Africa, it had distinguished itself during the deliveries of anti COVID equipment from China in 2020/2021.