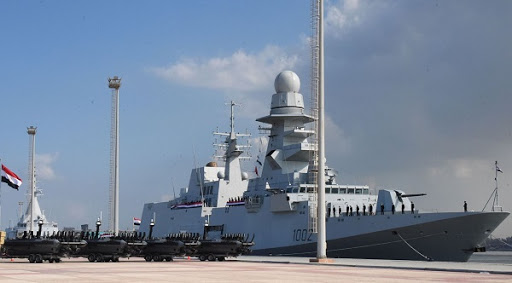 The Egyptian Navy has received its second FREMM frigate, ENS Bernees, from Italy. The ship arrived at the military port of Alexandria on April 14th.

According to the statement from the Egyptian Ministry of Defense, the welcoming ceremony showed the high level of excellence in relations between Italy and Egypt. For the MoD, the arrival of this FREMM: “will help Egypt to secure its borders, to support and protect the land forces along the coast during offensive and defensive operations, and finally to secure natural resources in the Mediterranean and in the Red Sea “by pointing out the increase in international rivalries for gas in the Mediterranean and with the dam crisis in Ethiopia.

The purchase cost of these two stealth frigates is estimated at 1.2 billion euros. It is part of a larger deal between Cairo and Rome including Falaj class corvettes, Eurofighter Typhoon fighters, AW149 and 189 helicopters as well as Leonardo M346 training fighters.

Al Galala is sold in a “multipurpose” configuration, therefore capable of anti-submarine, anti-aircraft, land-oriented and maritime interdiction missions. It is armed with a Leonardo 127/64 mm gun, a 76/62 mm Super Rapido gun and two 25 mm guns as well as the MBDA SAAM-ESD (Surface anti-aircraft missile – Extended self-defense) Air defense missile system capable of launching the Aster family. In 2015, the Egypt took possession of its first French FREMM (Tahya Misr) which was oriented anti-submarine warfare.

2021-04-16
Akramov
Previous: Russian troops will recieve the Okhotnik in 2024
Next: Biden accepted the Emirati “Deal”