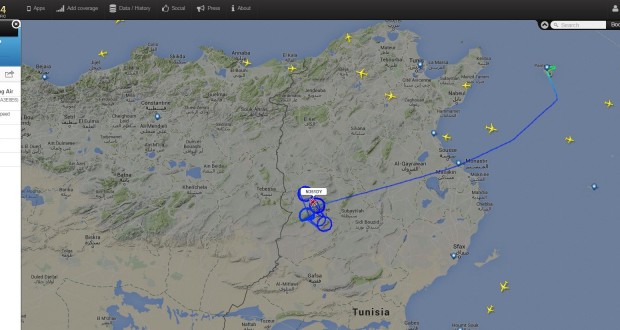 Tunisia: a US spy plane over mount Chaambi It was by pure hazard that we have discovered on Flightradar24, the strange behavior of an unidentified aircraft in the Tunisian sky. A Beech 300 Super Kingair, registered N351DY belonging to an unfamiliar American private company, took off from the small airport of the tiny Italian Pantellaria island at 10 am today, then headed West to Tunisia, over Kasserine. What was odd , is the unusual flying circle pattern for a spanstraight 6 hours, that lasted until 15.45 above the Mount Chaambi, an area so small that does not exceed a 50 kilometers loop Searching further in the recent history flight activities of the airport of Pantelleria, the same aircraft has flown the same pathway on the 21, 22 and 23 March, at the same times, and with the same intensity concentrated on the Mount Chaambi.
The concerned Beech 300 is a light turboprop aircraft with long endurance and is used by Algeria for aerial reconnaissance. The N351DY, is owned by a shell company, Aircraft Logistics Group LLC, based in Oklahoma. This corporation is just one subsidiary of Acorn Growth Companies a group with a very large contracts with the Pentagon, whose activities does include aerial surveillance and intelligence. The militarization of this type of craft and its capabilities, is clearly spelled out in Commuter Air Technology website. Retractable FLIR, nose extension, detection equipment, enhanced engine and installation of additional fuel tanks for flight range increase and finally compartment for radar equipment to the ground. The question that begs an answer is whether the craft and its mission was a request of the Tunisian government to monitor Mount Chaambi? Logic would, in this case, the plane would have chosen, Gafsa military airport located 70 km from Mount Chaambi or the more important to Sfax, 120 km, for its base of operation, much closer than isolated island in the Mediterranean. If it wasn’t a request of the Tunisian government, why the army of the Tunisian Air did not intervene to stop its operations? Or why the Algerian Air Force has tolerated a spy plane loitering ten kilometers from its border with equipment that can see and detect up to fifty kilometers of Algeria inland ? It is also possible on Tunisia wishes for a desire to cover up her inability to fight against a terrorism with modern means. We remember , the mysterious appearance of a L39 Algerian, without marking in Annaba airport, since that the L39 is the only craft that the two neighbors air force operate These issues being here discussed will likely remain a suspense, until, an official statement of the Tunisian government clarifies it.. Tagged with: Bardo IS Terrorism Tunisia

by  Scott A Morgan Within the last couple of weeks there have been a couple ...