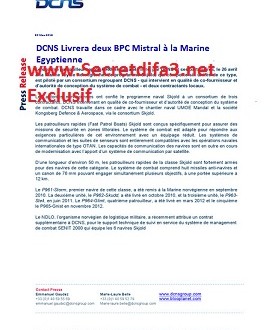 France to sell the two Russian Mistral Ships to Egypt The series of good news for Egypt seems to continue. An announcement made today by Hervé Guillou, CEO of the French DCNS  group to a German magazine stated that Egypt is now negotiating with the approval of Russia, for the transfer of the contract of the two Mistral class landing ships, The Vladivostok and Sebastopol, to the Egyptian navy.

The solution negotiated by General Sedki Sobhi, will allow Egypt, according to Hervé Guillou to move forward on the Mistral dossier, that poisons the French-Russian relationships.

We ignore the content of the financial agreement between Cairo and Moscow but experts are talking about of a combined military aid with an increased trade between the two capitals.

2015-04-01
Akramov
Previous: Tunisia: a US spy plane over mount Chaambi
Next: Was white phosphorus used by the tunisian army against Kassrine terroristes ?